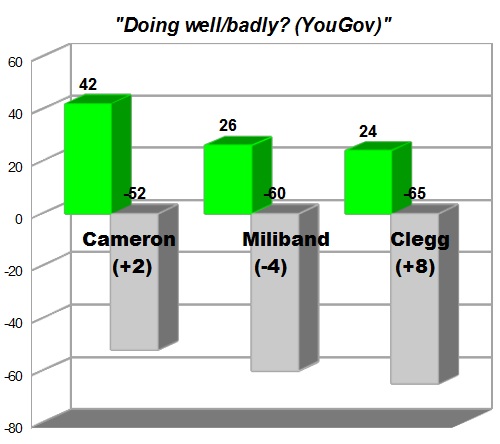 The Sunday Times poll from YouGov is just out and the VI figures of 36/40/9 show the Labour lead down to 4 but still comfortably ahead of the Tories and still in a position that would give them a majority if there was a general election tomorrow.

But, of course, there isn’t going to be an election tomorrow and some of the key measures for taking the political temperature are the regular leader ratings asking whether respondents think that Dave/Ed/Nick are doing well/badly.

As can be seen from the chart both Cameron and Clegg move up this week with Ed Miliband dropping a net 4 points.

The Labour leader’s “well figure” of 26% equals the lowest he’s seen from the firm and the net -34% has only been reached three times before.

The Nick Clegg net figure of -41% is the best he’s recorded since the poll published at the time of the Lib Dem party conference in September.

Cameron’s net of -10% is very much where he’s been since the end of June.

NOTE Disqus playing up. Toggle between newest and oldest to get the comments.