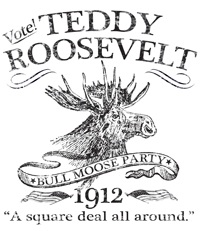 And what impact would a second one have?

Itâ€™s usually about this time that commentators begin to speculate about third candidates entering the US presidential race. Partly thatâ€™s because the line-up otherwise is known (itâ€™s too late now to file for some leading primaries), and third candidates provides the uncertainty on which pundits thrive. Thereâ€™s more than just talk to it this year given the organisation of the Tea Party and the scramble in some Republican quarters for a viable anyone-but-Romney candidate.

Historically, thereâ€™ve been three reasons for third candidates to enter the race: because of a split within one of the two main players, to advocate sectional interests, or a rich man on a ego-saviour trip. The sectional issue is no longer relevant but the other two very much are.

The overriding lesson of third party candidatures is that they fail. Always. There are extremely powerful reasons why that will always remain so. For one thing, if a candidate is good enough to win outright, they should be good enough to win a nomination (and if theyâ€™re not good enough to get nominated, why should they overcome both that candidate and the other party?). For another, campaigning structures cannot easily be put in place overnight and a third candidate must compete against two that have roots over a century old. For a third, the â€˜wasted voteâ€™ inertia works against any party without a track record or prospect of success.

The best example why a third-party candidate will not win but might profoundly affect the outcome remains the election of 1912, which bears examining in some detail as there are some current resonances (which is not to ignore the differences).

In that election, the former (nearly) two-term president Theodore Roosevelt stood against his hand-picked successor William Howard Taft for the Republican nomination, and lost due to the machine vote Taft had cultivated in the White House. Had the race been run on primaries, as today, Roosevelt would have won before Super Tuesday. Incensed, Roosevelt and his supporters left, formed their own Progressive (Bull Moose) Party and beat Taft into third place, splitting the vote and allowing Wilson to win by an Electoral College landslide on just 42% of the vote.

Itâ€™s difficult today to get a measure of how popular Roosevelt was at the time. Politically, he was the man of the age, radiating energy and vigour, in contrast to the ponderous Taft and coolly intellectual Wilson. The closest modern equivalent is in a very different country but it would as if Medvedev chose to run against Putin in Russia next year (except that there is no organised opposition that would benefit from such a move).

It was not enough. His barnstorming and fire-breathing oratory wasnâ€™t enough. His attempts to claim the heritage of his erstwhile party werenâ€™t enough (even his best-known election line powerfully echoed the iambic heptameter of the Battle Hymn of the Republic). His prominence as the foremost politician of his day wasnâ€™t enough. If someone with all those advantages cannot win against the party machines, no-one can.

What it can â€“ and did â€“ do was to allow the party which held together through the middle. Roosevelt and Taft between them secured about 9% more of the vote than Wilson. Wilson might have won against Roosevelt alone anyway (Rooseveltâ€™s popularity did not extend deeply into the ruling classes), and would certainly have beaten Taft, but at the least it would have been a far closer election.

In more recent times, Perot did GHW Bush no favours in 1992, and eight years later Nader made the difference between Gore and Bush (Nader was not really a true third-party candidate in the above sense but in a knife-edge election even the minnows can matter). Wallace may have prevented Humphrey succeeding Johnson in 1968. A split isnâ€™t always fatal though: Truman was strong enough to defeat the Republicans, Dixiecrat Strom Thurmond and former FDR VP Henry Wallace; and in 1980 Reagan overcame sitting president Jimmy Carter despite John Andersonâ€™s intervention.

So to this year. If there is to be a third-party candidate, it is most likely to be inspired by the Tea Party, drawing on Republicans disillusioned with a Romney nomination. The prospects of an independent running a la Perot are very slim. Apart from a lack of possible candidates, the escalating cost of presidential elections must cause even billionaires to baulk.

A Tea Party-backed candidate would inevitably result in an Obama re-election, so why do it? There are various reasons. The simplest is that logic does not always defeat emotion and strongly held beliefs can inspire apparently irrational behaviour. But it wouldnâ€™t be entirely irrational. As with the sectional campaigns of old, the purpose would be to put their agenda on the table and make life as uncomfortable as possible for the Washington establishmentâ€™s policies. Another would be to lay down a marker for 2016. After all, if Romney is that unacceptable, a Romney-Obama contest must result in defeat for the Tea Party and a Romney win would likely tie up the GOP nomination until 2020.

Will it happen? Itâ€™s unlikely but not impossible â€“ probably at least a 10/1 shot. One problem is the exact same one the Stop Romney activists have in the Republican Party: who can do it? None of the possible candidates is particularly plausible and if there were a true and credible voice of the Tea Party it would surely be clear by now.

Even so, that possibility has to be taken into account when looking at the 2012 odds. Obama has his problems but one he does not face is a primary challenge or a possible split in his vote. At the moment, that might be worth a few percent on his chances.