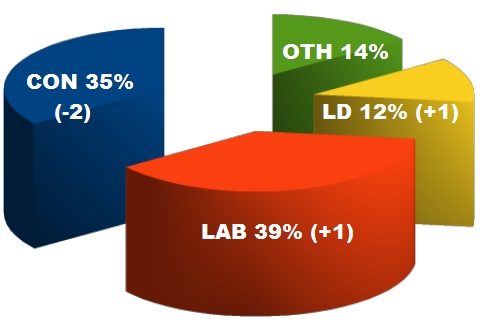 Is he right – Europe’s to blame?

Today’s Indy has the November “Poll of Polls” compiled by Professor John Curtice of Strathclyde University.

The big change has been a decline in the Tory share across the range of voting intention polls while both Labour and the LDs move forward.

Curtice suggests that the blues could be being affected by the split on Europe – as seen a fortnight ago in the commons vote on an EU referendum. He observes:-

“The trouble was that the European debate reminded voters of Tory divisions on the issue. The lesson for the Tories seems to be that they can only hope to profit from Europe if they can be seen to deliver.”

He also notes that the Tories don’t seem to have had any Libyan bonus.

We are now more than 30% into this parliament and this was always going to be a difficult period for party. Many were expecting to be much further behind at this stage.