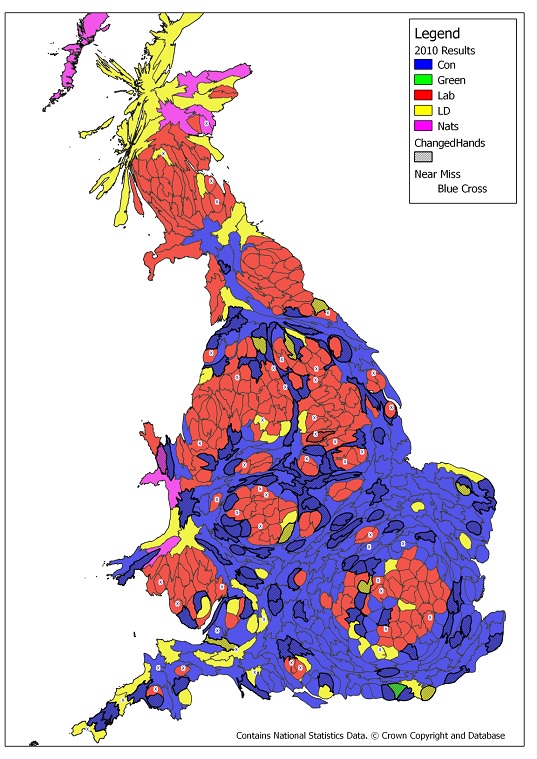 Thomas Huxleyâ€™s observation that many a beautiful theory was killed by an ugly fact is an often ignored truth. Back in 2007 on this site I theorised that the coming 2010 election was going to be decided not in cities, rural areas or Scotland, but in the English towns.

So what actually happened? Above are the 2010 results on a map distorted so that each constituency takes up roughly the same area. The seats that changed hands have light grey shading and a bold boundary while the seats that didnâ€™t change hands but were close battles are marked with a blue buffered cross.

That the bulk of the action was in towns looks clear, but a proper answer needs a categorisation of constituencies. Scotland is, well, Scotland. A seat that has more than 60% of its population within the urban area of a city sprawl that itself has more than 150,000 total residents is called urban, rural constituencies are larger than 600 square kilometres, and towns are the rest. Here are the results of the 2010 election summarised using these classifications.

Town seats make up half of all seats, but represent three quarters of all seats that changed hands. Three times as many town seats changed hands as urban seats. The Conservatives achieved better swings in English towns than cities, a differential that won them maybe 10 extra seats.

The 2015 boundaries are still in a state of flux, but the patterns will repeat. For the outcome of the 2015 election Scotland, London and the core of our great cities will still be largely irrelevant containing few near-miss or recently acquired seats.

If David Cameron can hang onto his new conquests amongst the towns of Central and Southern England, and combine that with turning just a few of those Northern towns and suburban near-misses into wins then he will have his majority. Labourâ€™s task is even simpler, win back those English towns.

All party strategists must still view their actions with the good folk of Luton, Grimsby and Telford in mind and not obsess over the London, â€˜Northernâ€™ or Scottish mafia.

For anyone who wants to explore the map in more detail I have a hi-res version poster size version of the map image that includes seat labels and data tables. It is available here And for the complete mapping gear-heads I have the underlying shape files also available for free download on the same page.

(Blair Freebairn is a geographer whose 2007 guest slot here was just about the best pointer to what would happen. It certainly shaped my thinking about the 2010 election – MS)