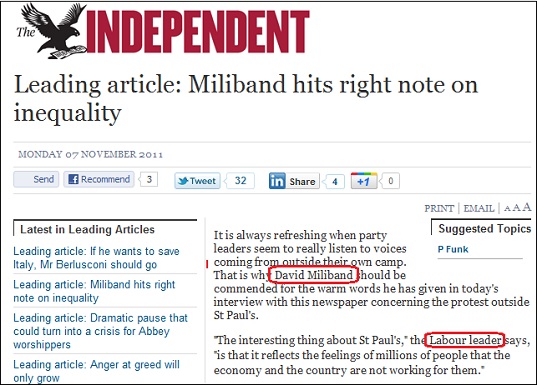 How can the Labour leader build public awareness?

The Indy has now put right the online version of this morning’s editorial about Ed Miliband’s comments on the St’ Paul’s demo. But, alas. it’s there for posterity in the printed edition and I got a screen grab – see above – earlier.

But what a stupid cock-up. Surely the un-named journalist who is a main leader at the paper should not have allowed this to happen?

For the paper this’ll be forgotten in a couple of days. For Ed Miliband, Labour’s leader since September 25th 2010, it highlights a big public relations problem.

Quite simply he’s found it difficult to make an impact and build public awareness.

This was seen in the latest leader ratings from Ipsos-MORI. 94% of those questioned had an opinion on whether they were satisfied or not with David Cameron; 88% had a view about Nick Clegg, while the Ed Miliband total was 82%.

It’s so hard for opposition leaders to get a look in and attract media coverage. Most political news is generated by government and Miliband’s challenge has been accentuated by the fact of the coalition. Often on big policy issues the focus is on disagreements between the coalition partners rather than what the official opposition is saying.