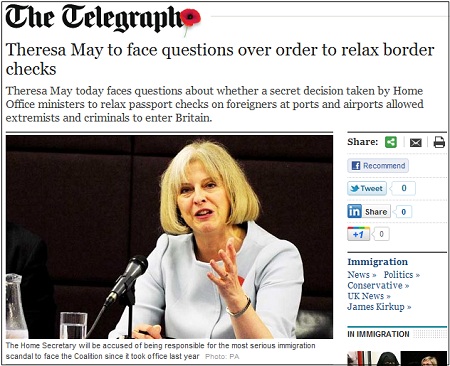 Should you be backing the HomeSec for next cabinet exit?

The main lead in the Times and the Telegraph this morning is what the latter is calling the “scandal” of the relaxation of border controls during the summer.

This is how the Telegraph’s James Kirkup is describing it:-

“The Home Secretary will be accused of being responsible for the most serious immigration scandal to face the Coalition since it took office last year.

Events at the UK Border Agency, which is part of the Home Office, have raised fears that foreign criminals and terrorists could have been allowed to enter Britain unchecked.

Whitehall sources said that in July, Home Office ministers asked officials to draw up a range of measures to cut queues at airports and ports during the summer holiday season.

Damian Green, the immigration minister, then told the UKBA to relax checks on people carrying British passports and those from other European countries.

The order, endorsed by Mrs May, meant that thousands of foreign nationals were able to enter the UK without full checks on their travel documents…”

The home office is always vulnerable to scandals like this – just look at how many home secretaries there were in the last Labour government. The critical thing for May’s survival is whether she was involved in the decision – as suggested in the Telegraph report.

Ladbrokes have May at 16/1 for next cabinet exit. Overnight PaddyPower were offering 25/1 though for very small stakes. (They allowed me just 21 pence). It might be worth a punt.