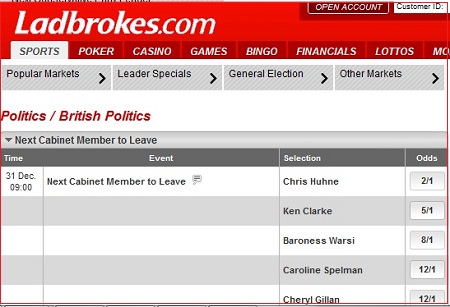 One of the best rules of thumb for political betting is that unpredictable events donâ€™t happen as often as popular memory (mis)remembers – or put another way, the value is usually against a resignation, leadership challenge or other like happening. The flip side is that sometimes, like with Liam Foxâ€™s resignation, they do. How best to identify the exceptions?

Ministers generally resign either because theyâ€™ve done something wrong or because thereâ€™s been a falling out.

Taking the latter first, this subdivides into those cases where thereâ€™s a genuine policy disagreement that both the minister and PM/cabinet see as important and unbridgeable, as with Nigel Lawson or Robin Cook, and those which are a more general protest against how the governmentâ€™s being run – think John Redwood or James Purnell. Itâ€™s not a clean distinction though and Heseltineâ€™s resignation in 1986 probably falls into both.

The tactical departures do have common features. They require a leader in serious difficulty, a mood for change, and a minister clearly outside the leaderâ€™s circle. Theyâ€™re also more likely to feature a middle-ranking cabinet minister. In the dog days of both the last Conservative and Labour governments, the â€˜wrongâ€™ person resigned – Redwood instead of Portillo, Purnell instead of David Miliband. The simple reason is that both those who stayed felt themselves in pole position for a post-election contest and the personal damage of a self-interested resignation wasnâ€™t worth the possible gain.

Policy resignations are perhaps the most difficult to foresee. Much of the debate takes place behind closed doors and that which leaks is unreliably partial. One of the arts of politics is compromise and reaching as favourable an agreement as possible. Even deep policy disagreements can be overcome by the right offers, threats and cajoling. Who would have thought that Clare Short would have remained in government through the Iraq War? If there is any common theme, itâ€™s to look to those ministers who have firm ideas, no great ambition for even higher office and are swimming against the tide.

But the majority of resignations are the result of misjudgements, gaffes or misdemeanours. The main questions to ask here are:

Political mistakes are easiest to brush aside as long as they donâ€™t go directly against something else the governmentâ€™s doing or campaigning on. If it does, it becomes a matter or â€˜minister or policyâ€™, and policy usually wins. It also helps a ministerâ€™s chances if they already have a reputation for saying or doing something embarrassing or off-message from time to time. Both Clarke recently, and Prescott during the 2001 election, acted in character with the formerâ€™s loose talk and the latterâ€™s brawl. The public – and prime ministers – can be more inclined to be understanding in such cases.

It also helped them that both those incidents had nowhere really to go once theyâ€™d taken place. Where the error of judgement is covered up, or relates to a pattern of behaviour, or is brought to light through an investigation reported on day after day (especially one outside the control of the government), the momentum builds, providing nothing else major breaks at the time. These are the instances that most commonly lead to a resignation, as with Fox.

The moral of all this? Ministerial resignations tend to come more out of left field than from known political tensions. Few would have backed Fox to be next out but those who did received good odds. On the evidence available, Huhne is rightly favourite to be the next to leave, but at 2/1? No thank you.