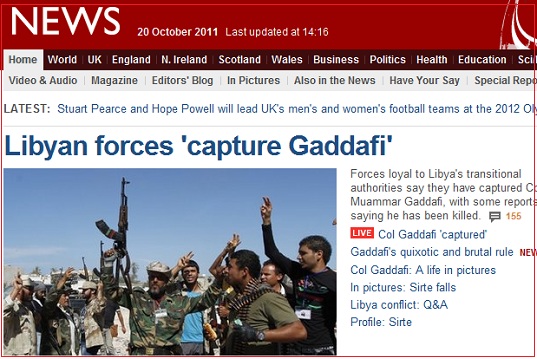 Where does this leave Libya, the Arab Spring and UK politics?

With unconfirmed reports that Gadaffi is captured, injured or even dead, the Libyan revolution looks to be almost complete.

It still leaves the Middle-East in a state of flux though.Â Egypthas not had the promised elections, Syria remains in ferment, Bahrain unstable and other leaders will be watching warily.

Domestically, Liam Fox may well be cursing his (largely self-inflicted)Â luck on the backbenchers that Gadaffi wasn’t found a week earlier, so giving his own story enough momentum to reach its denouement while Cameron’s good luck continues – not onlyÂ can heÂ claim credit for having led the international response (as can Sarkozy, who facesÂ his ownÂ electorate next Spring), he’s also got the cleanish result that was denied Blair in Iraq.

Mentioning Blair and Iraq, it was in Africa -Sierra Leone- that Blair first got the taste for proactive international intervention that in part resulted in his being so convinced aboutBritain’s participation in the Iraq War.Â  Whether the successful outcome in Libya will have a similar effect on Cameron remains to be seen.