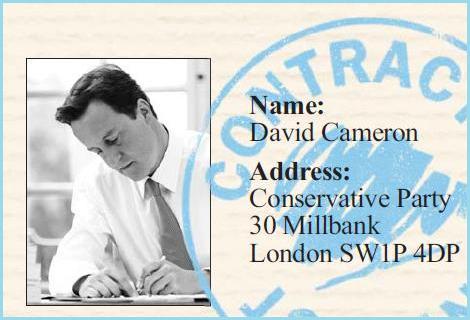 While the yellows have had to stomach u-turns on VAT and tuition fees, the Conservatives have by and large stuck to their guns on their pre-election promises in the Coalition Agreement. The Prime Minister clearly recognises how important it is for the next election that his â€˜contract with the electorateâ€™ remains intact. However there are now three fronts in which his clear pre-election pledges look to be severely tested by the next election.

Immigration â€“ to reduce annual net migration to the â€˜tens of thousandsâ€™. In the last reported year this increased by 21% and the flaw in the pledge is of course that governmentâ€™s find it very hard to control emigration. The Spectatorâ€™s Fraser Nelson believes the Prime Minister is almost certain to fail and will get the blame, â€œhe deserves the flak he’ll get because this was a daft target that could only have been set by someone poorly-advised about the nature of immigrationâ€.

Danger rating? 5/10 Immigration is a thorny issue and the risk though is that the numbers could be so spectacularly off beam. However the real saving grace for the Conservatives is that Labour is comprehensively outpolled on immigration issues, but the danger of dissatisfied Conservatives voting UKIP or not at all over this is plausible.

Environment â€“ â€˜I want this government to be the greenest government everâ€™. Cameron famously used environmental issue to detoxify his partyâ€™s image in opposition. At one point he even had a wind turbine installed on his roof to really labour the point. Now the government has slowed down the pace of carbon emission reductions, abolished the Sustainable Development Commission and according to Friends of the Earth is failing to make progress on three quarters of its green policy areas. Ministers are still in a tussle with the environmental lobby over planning reforms and the recent proposed 80mph speed increase will apparently increase CO2 emissions by 17%. It doesnâ€™t look brilliantly green from here.

Danger rating 2/10 The advantage for Labour is that Ed Miliband has plenty to say on the topic and it will make it even easier for Labour to appeal to disaffected Lib Dems and younger people. When compared to the economy the environment is unlikely to feature as a significant political issue at the next election – but it could harm the Cameron â€˜brandâ€™.

Health â€“ â€˜Weâ€™ll cut the deficit not the NHSâ€™ & ‘no more top down reorganisation of the NHS’. It is likely that the governmentâ€™s NHS reforms, if passed, will cause a significant degree of disruption – such is the scale. It is estimated that the cost of this will be Â£1.49billion and is going up by Â£1million per day and will increase the amount of private sector delivery. In the meantime it has been estimated in some quarters that the government funding for NHS will in fact be cut by 0.3% when inflation is fully taken account of. Fraser Nelson estimates this alone will result in a Â£1 billion shortfall but this will pale into insignificance with the challenge of Â£20 billion of â€˜efficiency savingsâ€™ and the political fallout from this and the reforms.

Danger rating? 7/10 Andy Burnhamâ€™s return to the health portfolio has cheered backbench troops but it allows the Conservatives to remind the electorate that the Â£20 billion efficiency saving target was set by Labour. During the leadership contest Burnham suggested he would have cut NHS spending to pay for social care instead. That said when Ministers blame the last government when hospitals are closing itâ€™s likely to be the current administration and its reforms that get the blame â€“ already even from his own side in the case of Nick de Bois MP. The claim to be avoiding top-down reorganisation already appears in tatters.

The danger in Years 2 and 3 for the Prime Minister is that â€˜broken promisesâ€™ develops to become part of a growing charge against him. There has to be a risk that the health and environmental positions will re-toxify him and his party and that a good chunk of Conservative support will lose faith with him over immigration. However it is the pledge made by his colleague at Number 11 to eliminate the structural deficit within one parliament that could determine the future of the Conservatives. That has 10/10 danger rating all over it and with the downgrading of growth and other readjustments, it looks far from certain to be met.