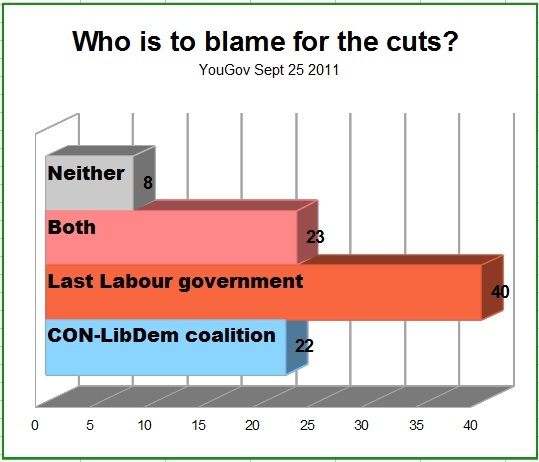 Or is the party still going to be held responsible?

Probably the biggest challenge facing the Two Eds is dealing with the perception set out in the polling featured above – who is responsible for the cuts?

The good news is that compared with a year ago there’s been a drop from 44% to 40% in those blaming Labour. The coalition, meanwhile has seen its proportion up from 20% to 22%.

The bad news for the red team is that in spite of everything a significant proportion of people continue to blame the Gordon Brown government that left office on May 11th 2010.

Almost all the polling has voters critical of specific measures and the way cuts are being carried out – but they are still holding Labour responsible for the big picture.

The Two Eds need to find a convincing way of dealing with this and from what I’ve seen this week there’s been little recognition that there’s even a problem.