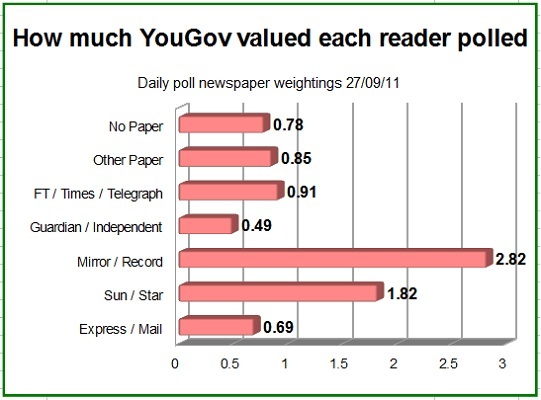 Is too much weight given to the views of Mirror readers?

The YouGov daily poll overnight saw an opening of the gap between Labour and the Tories with shares of CON 37%: LAB 43%: LD 8%. The Labour 43% is only two points below the party’s post-general election high.

For well over a year the online pollster YouGov has consistently been reporting higher Labour shares than the other firms. Thus in all but two YouGov polls since December the party has been in the 40s. During the same period Â ICM Â has not had Labour out of the 30s.

One issue which I’ve been raising here since 2005 is YouGovâ€™s use of newspaper weightings.Â The chart above shows how much value is put on each person sampled in today’s pollÂ based on their declared newspaper segment. A target number is established and if there are too many in one group their views are scaled down while the reverse occurs if not enough people in the sample meet the target for a particular segment.

The pattern featured is very similar to that which we see almost every day. At one extreme too many Guardian/Indy readers take part and their views have to be scaled back. The reverse happens with the red-tops, notably the Mirror/Record, and the views of those who do participate have to be scaled up.

The overall impact is that in this latest poll the “value” of a Mirror/Record reader in calculating the voting intention shares is getting on for six times that of a Guardian/Indy one.

This shouldnâ€™t matter too much if the views of participants broadly reflect those in the segment. But the larger the uplift the greater the margin of error.

A reason, I’d suggest, why YouGov has so much difficulty every day reaching its target of Mirror readers is that its weightings do not appear to take into account the big decline in the paper’s circulation.

In February the former head of polling at ICM, Nick Sparrow, sharply criticised the YouGov approach in a PB guest slotÂ here.