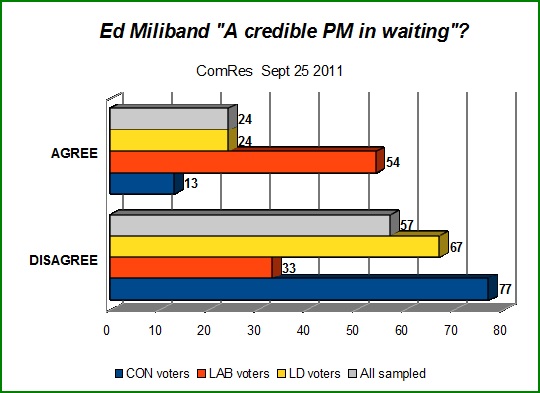 Are leaders able to build from a low base?

The above is the breakdown of responses to the big non-voting intention question in the overnight ComRes telephone poll for the Independent.

It’s not good for Ed Miliband with a third of those saying they’d vote Labour in the disagree column. In a general election people are voting for much more than a party and these poll findings can be highly indicative.

As I’ve repeated several times here the polling experience ahead of May’s Holyrood elections in Scotland underlined why numbers like this should be taken seriously.

Almost all the voting intention findings until the final three weeks had Labour with comfortable margins and heading to be the biggest party. But poll findings on leadership qualities and who would be best First Minister had Scottish Labour’s Iain Gray a long way behind the SNP’s Alex Salmond and so it turned out to be.

The set-piece leader’s conference speech that we’ll see in Liverpool this afternoon is crucially important partly because it gets guaranteed saturation broadcasting coverage.

It can be hard in normal time for opposition leaders to make their voices heard. This is Ed’s big chance and his speech matters.

I think that the manner in which he presents himself is as important as the content. Can he convince more voters that he is a credible alternative PM to the one we’ve got?