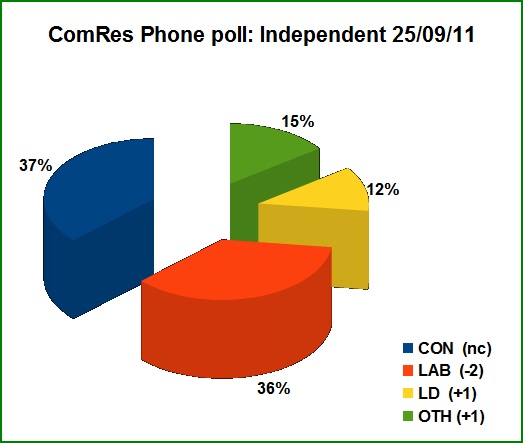 For the first time since October last year the Tories have moved ahead of Labour according to ComRes.

On the Labour leader just 24 per cent agreed and 57 per cent disagreed that EdM was a credible prime minister-in-waiting.

Only 27 per cent thought that Ed Balls would make a better Chancellor than George Osborne, while 43 per cent disagreed. Four in 10 people (40 per cent) said they would be more likely to support Labour if it said sorry for the mistakes it made in running the economy, but 52 per cent disagreed.

Meanwhile, 48 per cent believe trade unions enjoy too much influence over the Labour Party, but 37 per cent do not.

Note that the changes recorded in the chart above are with the last phone poll from ComRes which also carries out online polling.

The voting intention moves are minimal and within the margin of error.