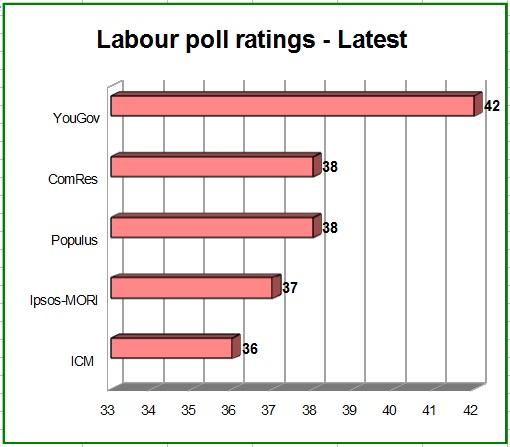 How much is his survival dependent on YouGov?

“There is no way in the world Ed Miliband will be allowed to lose the next election. If it looks like he cannot win then heâ€™ll be gone. MPs, grassroots and unions all desperately want to win outright and failing that be largest party. Iâ€™ve never known the movement soon focused and hungry â€“ more so than 1994. If Ed Miliband isnâ€™t delivering the goods then heâ€™s gone. Simple as that. I hope he succeeds but thatâ€™s how it is.”

As we saw another poll ovenight, from ComRes, has Labour on the decline and well under the 40% threshold. The only pollster that consistently has Labour above the 40% threshold is YouGov and only has had the party below that level twice in its last 160 surveys.

I just wonder what Ed’s prospects would be if the News International daily poll contract was with ICM which has not had Labour at 40% or above for several years. As it is that firm does just one poll a month.