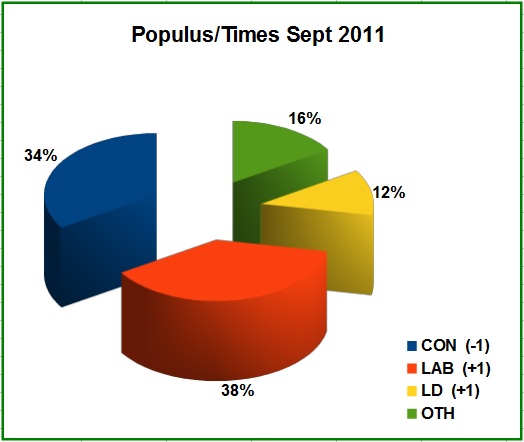 What will the boundaries do for Labour’s target?

For various reasons I’m just catching up with today’s Times Populus poll which shows very little change on what the firm reported in July.

An interesting question is whether a Labour 4 point lead would now be enough for a majority?

A few weeks after the 2010 general election Professior John Curtice produded figures suggesting that the Conservatives would need a margin of 11.2% in votes over Labour to secure a majority while the target was only 2.7% for the red team.

That was all before the reductions in commons seat numbers, equalised seat sizes and the fast track system to handle boundary reviews.

As suggested in the previous thread early analysis of the first batch of boundary proposals, for England, suggests that if the changes had been in place the Tories could have been very close to a majority in May 2010 when their vote margin over Labour was 7.3%.

What is clear is that the days of Labour securing an overall majority with just 2.2% are over. The question is how high has the bar now been listed for Labour?

On the boundaries the Wells analysis on UKPR suggested that the boundaries meant 18 losses in England alone. We still await the Scottish and Welsh proposals but it’s clear that the overall losses will be quite substantial.

Without the proposals or the detail any projection is simply a guess – but I reckon that just as the bar for the blues in terms of votes has dropped by three and a bit points then Labour’s will be up by a broadly similar amount. So anything between a Tory 7.5% lead and a Labour 5% one will have us in hung parliament territory.

This will mean that the Tory and Labour vote targets will be much closer but the red team will still have an advantage.