Update 2: Yes, I know there are problems with the current discussion system. But I need to get some sleep, so you’ll all have to wait until tomorrow before they’re fixed. In no particular order, the things that will be changed are:
1. No nesting of replies
2. A reintroduction of comment numbering
3. A removal of the image posting facility
4. Absolute, rather than relative, timestamps on comments
5. Some pretty-fying, so the commenters’ name is not so large

You are able to post on the new system now – in fact, to help me test that everthing is working as it should I positively encourage you to post… 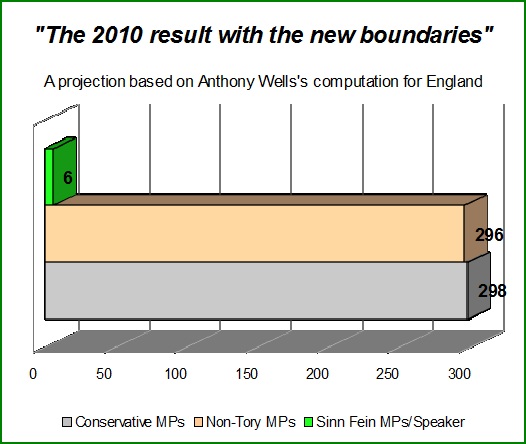 Would this have been the outcome with the new boundaries?

The chart above is a projection of what the 2010 election result might have looked like if it had been fought on the new boundaries for the 600 seat house of commons.

This is based primarily on Anthony Wells’s excellent work on UKPR overnight in which he’s made a first stab at projecting how many seats the parties would lose with the initial boundary proposals for England. Because of the overall reduction from 650 nationally to 600 all parties see a drop but the scale for each is different.

The Wells projection of reductions was 5 for the Tories, 18 for Labour, 7 for the Lib Dems and one for the Greens.

On top of that my computation makes a stab at the number of Tory seats that will be lost when the Scottish and Welsh boundary proposals are published in the coming months. I’ve put this at three overall. There aren’t, of course, many seats involved. The Tories currently have only one Scottish MP and eight Welsh ones.

Finally I have stripped out of the overall totals five Sinn Fein MPs who never take their seats at Westminster and, of course, the Speaker.

So that would leave the Conservatives with 298 MPs against a total of 296 MPs of all other parties who could vote against. This is an overall majority of 2.

There are huge caveats we need to build into all of this, as Anthony’s post makes clear, but my guess is that once the new 2015 seat calculators are in place then we could see the blues moving into overall majority territory when their GB vote lead over Labour is about the 7.3% that they achieved in May 2010.

This is NOT a projection of what will happen next time but a demonstration of how the bar for the Tories has been lowered.