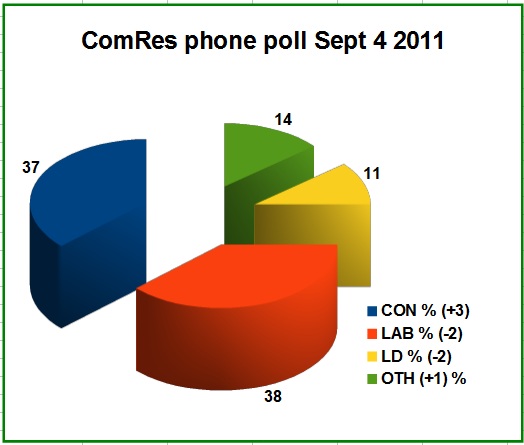 What does the say as we enter conference season?

There’s a new ComRes telephone poll just out for tomorrow’s Independent and shows a sharp narrowing of the gap between the two main parties since the last comparable poll at the end of July. The comparisons on the chart are with that survey and not with a more recent ComRes online poll.

The broad trend is is in line with what we’ve seen from other firms – an easing of Labour’s position.

The last News International daily poll at the weekend had Labour below 40 and just one point ahead of the Tories. We’ll now very soon whether that has continued.

In other findings ComRes has George Osborneâ€™s plan to scrap the 50p top rate of income tax is seen as unfair by voters across the political spectrum.

A total of 57% agreed that abolishing the 50p rate would show we are not â€œall in it togetherâ€ as the Chancellor has claimed – a view is shared by 67 per cent of Liberal Democrat supporters, 64 per cent of Labour supporters and 54 per cent of Conservative supporters. Overall, only 31 per cent disagree.

However, the poll also found that 56 per cent of people believe that scrapping the 50p rate, which applies to earnings over Â£150,000 a year, would encourage entrepreneurs to stay in Britain, while 34 per cent disagree.

There is strong support across the spectrum for Liberal Democrat calls for new taxes to be imposed on wealth such as property, rather than income, to ensure the very rich pay their fair share. Some 71 per cent agree with this proposal, while 24 per cent disagree.