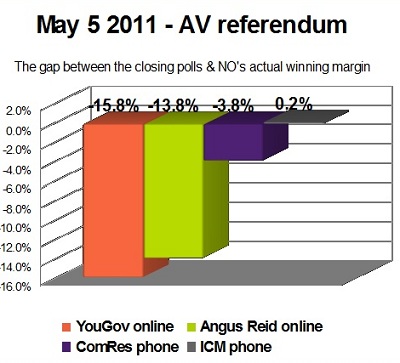 The big polling news of the week has been the difference view between the online pollster, YouGov, and the phone firm ICM on what voters are now thinking. The former has had Labour with leads of 5% or more all week – the latter, for the second month running, had the Conservatives with a one point lead.

A big difference between the two has been with the Lib Dem share. For YouGov has this at 9% while ICM had it nearly double at 17%. You can’t explain that by margin or error.

The only time we can test pollsters is when their final surveys before an election are tested against real results and the most recent national example was in May for the AV referendum.

The chart above shows how near the final surveys from the four pollster got to what actually happened. As can be seen YouGov undershot NO’s winning margin by 15.8%. ICM over-shot by just 0.2%.

For years, as PB regulars will know, I’ve said that ICM is the “gold standard” irrespective of whether I have liked their findings or not. The May 5th 2011 test reinforced that view.