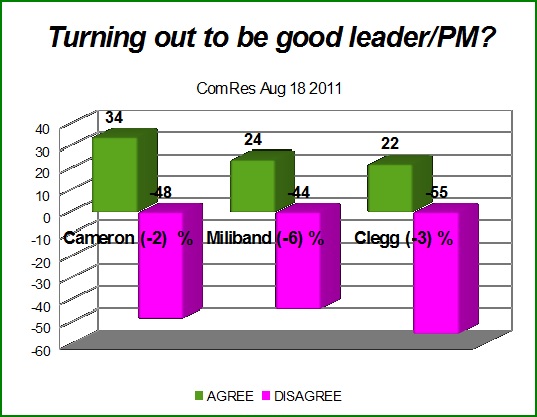 The monthly online poll by ComRes for the Indy on Sunday/Sunday Mirror is just out and sees the coalition partners moving upwards while Labour stands still. The figures with comparisons on last month are CON 38% (+2): LAB 40% (nc): LD 11% (+1). These are all well within the margin of error though the blues will be pleased to be getting within two points of the reds.

ComRes is continuing with its monthly leader ratings with the question “EdM/NickC/DaveC is turning out to be a good leader/PM..” Agree or Disagree?

As can be seen the biggest net drop since mid-July is the minus 6% for Ed Miliband. Last month, of course, it was the middle of the hacking scandal and the Labour leader was getting a fair bit of coverage. His positive figure of 24% is the second largest since ComRes began asking this question last December.

Miliband and Cameron, unlike Clegg, have positive ratings which are below their party’s positions on voting intention.

Clegg‘s numbers continue to be awful and what might be worrying is that nearly a quarter of Lib Dem voters rated him negatively.