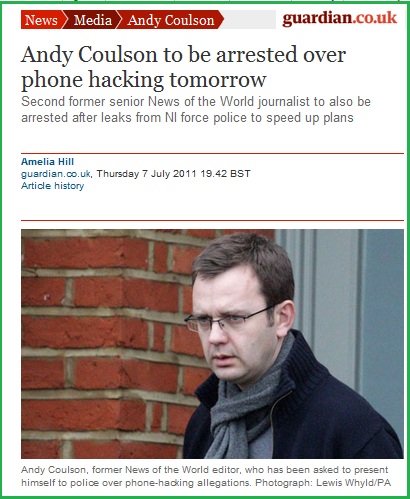 What will this do to Cameron’s position?

The latest development in the hacking affair is a report in the Guardian that ex-Number 10 Communication Director, Andy Coulson is to arrested tomorrow.

The paper reports: “Andy Coulson has been told by police that he will be arrested on Friday morning over suspicions that he knew about, or had direct involvement in, the hacking of mobile phones during his editorship of the News of the World.

The Guardian understands that a second arrest is also to be made in the next few days of a former senior journalist at the paper.

Leaks from News International forced police to speed up their plans to arrest the two key suspects in the explosive phone-hacking scandal.”

This could be highly damaging to David Cameron who is already under fire for his close links with the Murdoch empire.

We are getting into very tricky legal territory – Please no speculation, ideas, smears, innuendos about the possible arrest and please link from reputable news sources (major newspapers, BBC, SKY websites etc) regarding the events.

UPDATE: In a blog post published before the Guardian report the BBC’s Nick Robinson wrote: “Rumours that Andy Coulson, the prime minister’s former director of communications, has been or will be arrested this afternoon are not correct. Neither Mr Coulson nor his solicitor are commenting today on allegations made by his former employers – News International – that e-mails they’ve discovered show that he authorised illegal payments to police officers.”