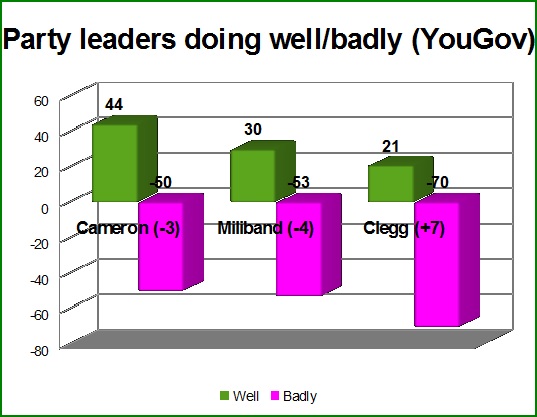 On the previous thread one or two people were asking for information on the latest party leader ratings from YouGov. The figures are represented in the chart above with change in the net from the last poll a week ago.

The YouGov question asks “Do you think DC/EdM/NC is doing well or badly as leader of the Labour party?” It’s put in exactly the same form almost every week so we can track trends.

I much prefer the Ipsos-MORI form of words which asks whether those interviewed are “satisfied/dissatisfied” and the polllster has data going back to the late 1970s.

So the latest numbers have Cameron on a standstill in terms of the net, Miliband down a bit and Clegg up quite a lot on his lowest figures since the general election that we saw a week ago.