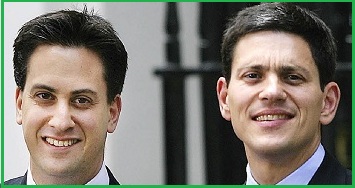 Labour has to do a hell of lot of work to get in fighting shape for contention at the next election. I’ll look at some of these issues in future columns. However it struck me straight after Ed Miliband’s election as Labour leader there were three seemingly ‘superficial’ things that had to be corrected before he really got a proper look-in at becoming Prime Minister.

I know this makes me sound old-fashioned but the first of these was getting married [done]. The second was fixing his voice [scheduled for summer]. The third is getting his brother back on board.

When David Miliband chose not to stand in Labour’s Shadow Cabinet elections it created a big problem. Although it was presented by him as a chance to give Ed freedom and space to define himself, it is more than that. His comments at the Hay-on-Wye Festival again allude to the private upset caused not just by the outcome of the leadership election but by the fact that he stood against him in the first place.

It is harsh on Ed Milibad, but voters can be forgiven for thinking at the next election ‘why should I vote for a guy who doesn’t even have the support of his own family?’

There are 3 main reasons why Ed needs David back:

1. A small but significant chunk of the party is still shaken by David’s unexpected defeat and departure. 9 months on from the leadership election some are still in an agitated state. While the older brother has been at pains not to rock the boat from the backbenches, Labour cannot claim to be a fully united party without him. We look lopsided. David’s absence is a constant reminder of that traumatic leadership contest. To lose the tag of ‘the guy who shafted his brother’ Ed needs David back and sat next to him. Looking un-shafted.

2. He’s good. I don’t quite share the older Miliband’s politics but recognise he’s a relatively big beast with appeal to some of the people Labour needs to win back from the Conservatives. The public know who he is and get a sense that he always has something to say. Compared to one or two on our frontbench he’s a colossus. Similar to William Hague’s return for the Conservatives, he will bring some much-needed experience and gravitas. The shadow cabinet at some point needs to become a ‘government in waiting.’ It’s hard to see that happening without David Miliband in there.

3. He will unsettle the Conservatives. If you were Michael Gove and were being shadowed by David Miliband you’d have to work a damned sight harder than against Andy Burnham. If he’d have been in health, Labour would have killed off Lansley weeks ago. Clegg certainly wouldn’t be getting any credit for ‘saving’ the NHS from a Bill he had fully signed up to and had previously whipped his MPs on.

The danger of all this of course is that David’s return causes a collective case of Bullseye Syndrome for the party and country – ‘this is what you could have won’. So be it. Ed cannot even dream of being PM while his brother remains on the backbenches. It’s a risk well worth taking. He should do whatever it takes to get him back. The sooner the better.

THANKS TO ALL OF THOSE WHO HAVE RESPONDED TO THE PB APPEAL: Quite a number of PBers have responded to our request to help keep the site going going and to provide a facility to support Marf's work. A third of the proceeds of this appeal are going to to that end. This has been prompted by a fall in display advertising revenue which in many months is not covering core costs.