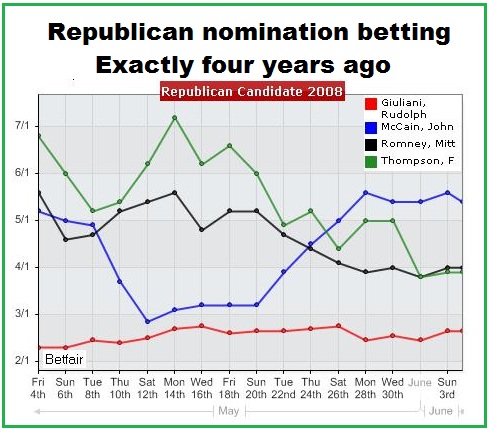 Do early polls and betting mean that much?

The chart shows the Betfair prices on the four favourites ate exactly this stage in 2007. Notice how the eventual winner John McCain had started to edge out – by July 2007 you could have got on him at 25/1.

Notice too how the money was going on the ex-New Yory mayor, Rudi Giuliani, whose price got tighter and tighter as we got closer to the first primary – the Iowa Caucuses at the start of January.

Only a fortnight before that first electoral test Hillary Clinton was odds on favourite for the Democrats with Giuliani odds on the Republicans.

It had been the same with the Democratic favourite four years earlier in 2003/2004. All the money had piled on to Howard Dean who was a tight odds-on favourite as the Iowa campaign reached its climax.

For that first electoral test can have a decisive impact on the race. As the Iowa voters got a close look at Dean in 2004 it became very apparent that he wasn’t suitable to be his party’s standard bearer. In 2007/2008 Giuliani didn’t put real effort into Iowa which was won by Mike Huckabee with Romney getting stung.

My view is that the GOP contender who could do best in the Iowa caucuses is Jon Huntsman who is hardly registering in the polling at the moment.

“Thinking forward just two and a half years you can see what a hurdle the Iowa caucuses in January 2008 are going to be for Hilary. The nature of this process and the way people get together and discuss the options saw off the favourite, Howard Dean last year and might be the context that is good for a charismatic contender like Barack”