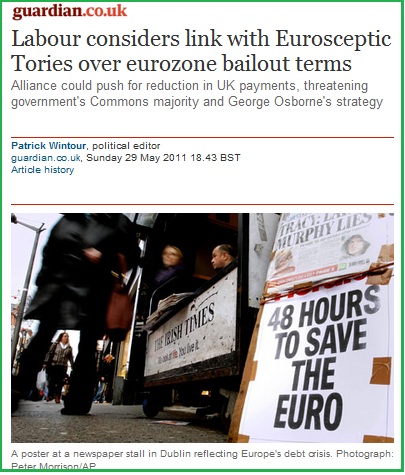 Could the blues be vulnerable on the bail-out costs?

Patrick Wintour in the Guardian has an interesting piece about a Labour plan to “to work with Eurosceptic Tories to reduce the size of UK contributions to the bailout of troubled eurozone nations and to cut the timescale of UK liability.”

He writes: “Labour is weighing up an alliance with increasingly fractious Tory Eurosceptics over two specific issues likely to return to the Commons in the next few months â€“ a move that could threaten the government’s Commons majority on some key votes or, at the very least, politically embarrass the chancellor, George Osborne.

The first is the degree to which the commission is disproportionately drawing on the European Financial Stability Mechanism (EFSM), to which Britain makes contributions…The second could build on anger at the failure of the coalition government to do more to demand the swift introduction of a permanent bailout mechanism from which Britain would be excluded…”

Politically this seems to be a sound strategy for Labour because the one big issue that Cameron & co have managed to sweep under the carpet in the coalition’s first year has been Britain’s relationship with the EU.

The plan sounds like a re-run of the hugely effective Labour tactics during the Tory 92-97 government. Then issue after issue was put forward by Labour in order to encourage Tory splits and put pressure on John Major.

Will that work again in 2011? It could do and looks like smart opposition.