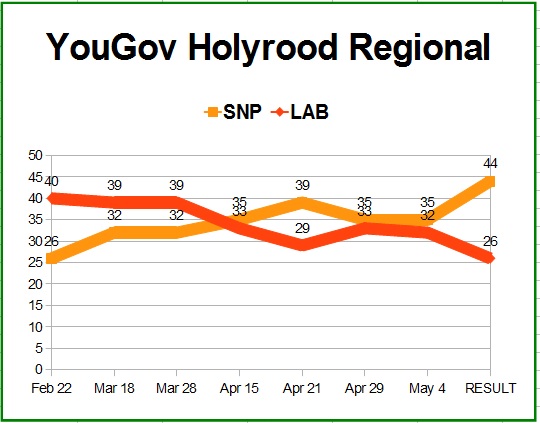 Ten weeks in Scottish politics – what are the lessons?

I’ve been meaning to put up this chart for some time because I’m sure that the polling experience leading up to the Holyrood election on May 5th will be referred to time and time again.

This shows the regional list where the changes were most pronounced. From a position just ten weeks before election day where Labour had a 14 point lead over the SNP voters on the day gave Salmond’s party an 18 point margin over Labour.

In terms of changes and turnarounds I don’t think that there is a precedent. This was spectacular in the extreme.

Even in the final forty-eight hours big movements seemed to be taking place. YouGov’s eve of voting poll had an SNP lead of just three points and it looked as though the gap was narrowing. As it turned out the outcome was 44 to 26.

Before people conclude that this was YouGov the only ICM poll of the campaign – on March 18th – had the SNP on 34% to Labour 37% which was not dramatically different from the online pollster’s survey three days earlier.

Something dramatic happened in Scotland in those weeks before the election giving the lie, I’d suggest, to those who say that campaigns don’t matter.