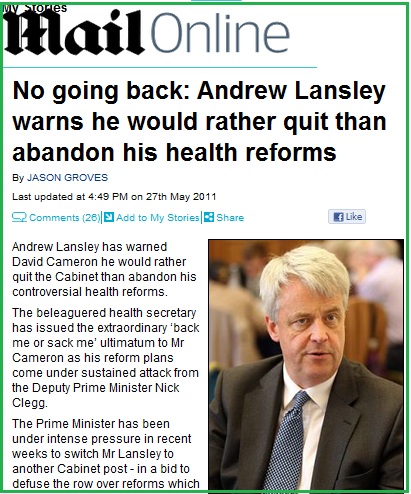 How serious is his resignation threat?

According to the Daily Mail the health secretary, Andrew Lansley, is threatening to quit over his NHS reform plan.

The paper’s Jason Groves says that Lansley has told the PM that he would reject a face-saving plan to switch him to another role and if it came to it would quit the cabinet.

The report goes on: “In an outspoken public intervention ..he said driving through the health reforms was now his only political goal. â€˜Iâ€™ve stopped being a politician – I just want to get the NHS to a place where it will deliver results. â€˜I donâ€™t want to do any other Cabinet job. Iâ€™m someone who cares about the NHS who happens to be a politician, not the other way around.â€™

Going on the record, if that indeed is what he did, with this sort of threat is highly risky for any politician and suggests that the health secretary is trying to put as much pressure as possible on Cameron.

Ladbrokes make Lansley the 8/1 joint second favourite to be next out. Huhne is currently 1/2.