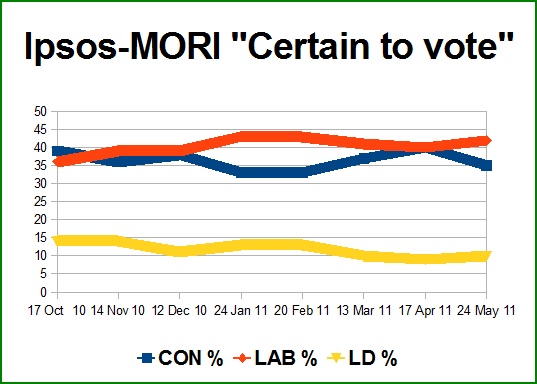 But only 17% think Miliband is ready to be PM

In what the Reuters news agency is calling a “slight fall” the Tories have dropped five points in this months Ipsos-MORI political monitor for May. Labour, meanwhile are up two and the LDs one.

Fieldwork for phone poll was finished on Tuesday and this is the only non-online survey that we’ve had since the May 5th elections.

But this is not all good news for Labour with only 17% of those samples thinking that Miliband’s “ready to become PM” – this includes more than half of his own party supporters.

Overall, only three in 10 people think Labour is ready to form a government a year after it lost power.

Satisfaction with Nick Clegg, continues to fall with only 29 percent happy with his performance compared to 61 percent who are dissatisfied.

We should get the full detail later in the day.