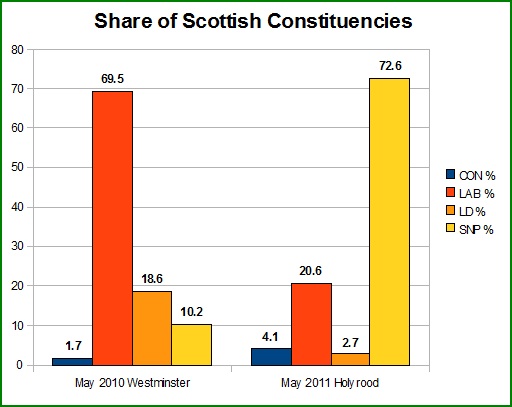 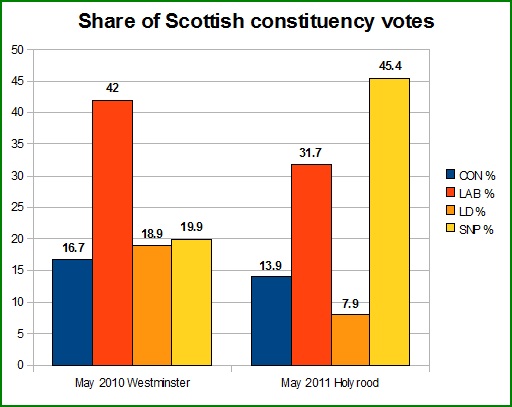 Did Miliband’s majority hopes get smashed on May 5th?

I’m sure that most Pbers are aware that the way Britain’s electoral system works out means that Labour can secure a majority with a much smaller national vote share and lead than the Tories.

Thus in May 2010 the blues were twenty seats short of an overall majority even though their national vote share was higher than Labour’s five years earlier and their margin was double what Blair’s party had had over the Tories.

Labour, however, continued in power from 2005-2010 with a comfortable 60+ majority. David Cameron had to do a deal with the Lib Dems.

Traditionally one of the drivers of this has been Scotland. Look at the two charts above and notice the dramatically different return that Labour secured in seats for its 42% vote share north of the border in 2010.

But has all that changed following the resurgence of the SNP in the Holyrood elections just twelve days ago? How much of this will carry forward to the next general election in 2015 and what impact will it have have on seat totals for both Labour and the Lib Dems?

Winning, like in 2010, two thirds of the Scottish Westminster seats on barely two-fifths of the vote is central to Labour’s election mathematics. On May 5th Labour secured barely one fifth of the constituency seats even though it had nearly one third of the constituency votes.

With just one Tory MP north of the border Scotland barely matters in terms of whether Cameron can secure a majority. For Labour, though, it could be crucial.

The week before last Labour’s constituency seat short-fall was partially made up by the regional list top up seats which are not shown in the charts. No such mechanism exists for Westminster elections.

The next couple of days on PB: I’m off to a family funeral in Northumberland and won’t be posting and probably won’t even be looking at the site until Thursday. PB will be in the capable hands of David Herdson, Paul Maggs and Morus.