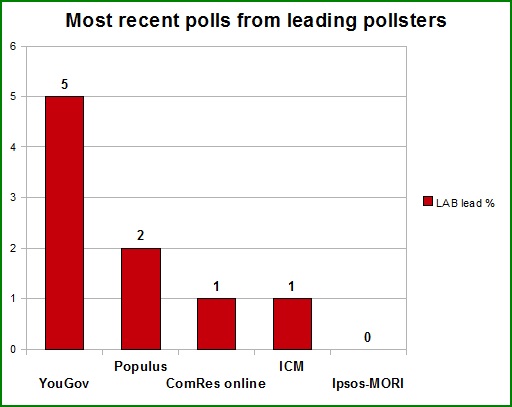 The chart shows the Labour leads from the most recent surveys of the pollsters that have reported in the past month. YouGov which reports five days a week changes all the time though it tends to show much higher Labour shares than the others.

This year it has had Labour in the 40s in every poll bar one – the survey that was taken on election day, May 5th. ICM, by contrast, has not had Labour above 39% in any poll since the general election. For the AV referendum ICM’s 32-68 got the final outcome to within an incredible 0.1%. The YouGov’s final poll was 40-60.

As I’ve raised here on a number of occasions I am concerned about YouGov’s newspaper weightings which seem to be over-weighting Daily Mirror/Record readers by quite a degree. The weighting numbers used don’t seem to relate to current circulation or readership data.