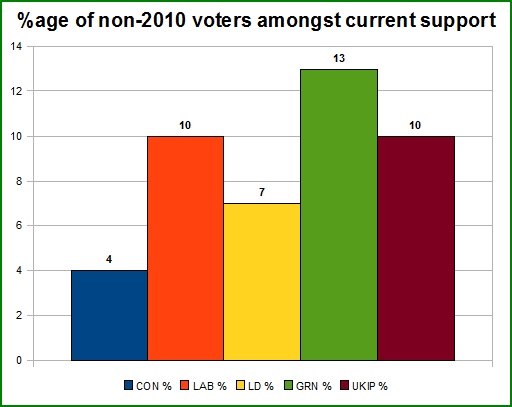 A closer look at the latest ComRes online survey for the Indy on Sunday and Sunday Mirror suggests that Cameron’s Tories are now enjoying a lead amongst those who could be arsed to vote at the 2010 general election.

The pollster is the only firm to make this data available and I highlight the proportion of non-2010 voters amongst those now saying that they will vote for the five parties.

As can be seen the blues are doing best with just 4% in this category. The Lib Dems have 7% of non-general election voters in their current support while the figure for Labour is 10%. The smaller parties see even high proportions.

My back of an envelope calculation suggests that restricting the poll to voters only would give the blues a 2% lead.

This matters, I’d suggest, because the group of voters most likely to vote next time are those that did so at the last election.

ICM recognise this and reduce the “value” of non-voters from last time by a half when calculating their final VI figures.