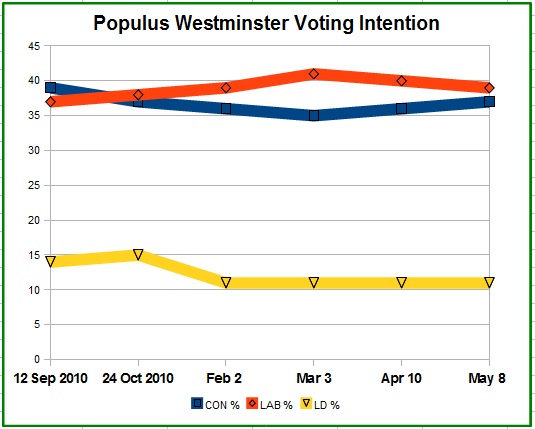 There’s a new Populus phone poll in the Times which sees the Tories edging up a point with Labour dropping one and the Lib Dems unchanged.

This means that all the phone polls this month have Labour in the 30s. This is in sharp contrast to the online firms which have Ed Miliband’s party a few notches higher.

YouGov, for instance, has had the main opposition party in the 40s throughout 2011.

With ICM, the phone firm that got the referendum result to within 0.1%, Labour has not broken the 40 barrier since the election.

In other questions Populus found that there’s declining support amongst LD supporters for the coalitionâ€™s deficit reduction strategy. In February, this was backed by 61% which has now dropped to 46%. We can’t read too much into this because we are dealing with small sub-samples.