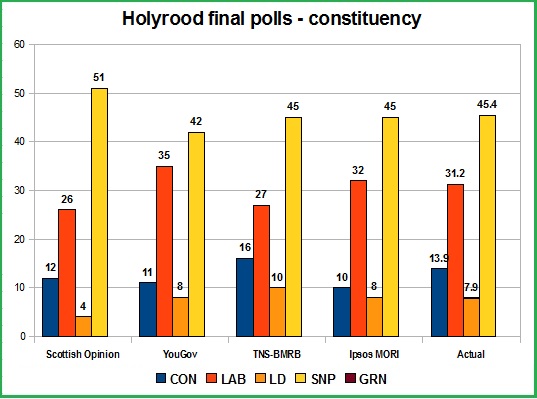 Before we finally move on from the pollsters’ performances in their final surveys ahead of last Thursday’s election we still have to cover Scotland. The chart for the Holyrood constituency section is above.

Alas ICM, the top pollster from the Scottish Elections in 2007 and the firm that got the AV referendum correct to within a remarkable 0.1%, did not carry out a Holyrood survey after March 15th and is not included.

It should be noted that the Ipsos-MORI survey, which was the most accurate, was finalised before Easter and I’ve included it because it was the only conventional phone poll in the final run up. By the time of the survey, however, postal voting had started. It should be noted that a YouGov poll carried out at the same time produced similar figures.

YouGov did do a poll on election day which showed a hardening of the trend towards the SNP but that was a sort of exit poll.