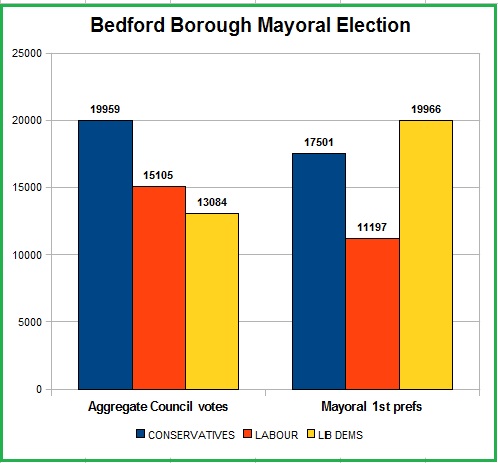 There were several requests yesterday for me to do something on why the mayoral election result in Bedford borough bucked the national trend.

A bit of history: The Tories should have won this in a by-election in 2009 when their failure was put down to an “open primary” which produced a candidate from the Asian communities leading to huge rows and splits in the local party. This time the selection was restricted to the local associations with a white businessman and ex-CCHQ staffer being chosen.

Cameron was amongst several cabinet ministers who campaigned in a battle that had all the ferocity of a parliamentary by-election. Turnout was nearly 50%.

For the Lib Dems this was always going to be a tricky defence in view of the national picture and the fact that to succeed they needed substantial tactical switching from Labour supporters – something that they feared would not happen.

The chart above compares the aggregate main party votes in the councillor elections at the same time with the first round of mayoral voting. As we can see there was a 4,000 vote difference in the Labour councillor vote aggregate and those voting for Labour’s candidate for mayor. Clearly there was a huge tactical switch. The Lib Dem also got an incumbency boost from Tory voters.

This was reinforced in the second round when many Labour supporters were ready to give their second preference to the Lib Dem who won with 24,291 votes – nearly five thousand ahead of the Tory.

A key driver of the RED>YELLOW tactical switching was the programme of high profile visits and attacks on the LD incumbent by David Cameron and his ministers. These left Labour supporters in no doubt that to stop the blues they had to go yellow.

The branding of the campaign was standard Lib Dem with hundreds of the standard diamond orange posters all over the borough.

The incumbency effect and anti-Tory tactical voting are two reasons why the Tories might not make as many gains from the LDs as the national polls would indicate.