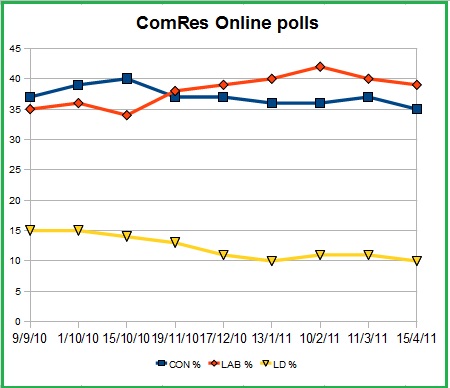 And NO increases its lead on AV

Tonight’s ComRes online poll for the Indy on Sunday and the Sunday Mirror is out and shows that all three main parties have seen a decline in support since the last comparable poll in March. The shares are CON 35: LAB 39: LD 10: OTH 16

The ComRes phone polls are treated as a separate polling series from the phone surveys. We have not seen the detailed data yet but others have moved up 4% and I wonder whether a lot of this is down to UKIP and also the SNP/PC in Scotland and Wales ahead of the developed general elections.

On AV ComRes is reporting that NO now has a 6% lead compared with a 3% one last month. These figures, like in March are based on applying the Westminster certainty results to the referendum numbers.

To me this undermines their validity and no other pollster is operating in this way.

Other relevant AV finding are as follows:-

If there are no local or national elections in my area, it is hardly worth going to vote in the referendum on the voting system on the 5th of May.

My opinion of Nick Clegg will affect how I vote in the referendum on the voting system on the 5th of May.

My opinion of David Cameron will affect how I vote in the referendum on the voting system on the 5th of May.

This suggests that the “Yes” campaign could get more out of suggesting that a “Yes” vote would be a vote against David Cameron, in the way that the “No” campaign have urged people who do not like Nick Clegg to vote “No”.

Other findings from the polls are:-

I am glad that Gordon Brown is no longer Prime Minister.

Of Labour voters 36% said they were glad that Gordon Brown is no longer PM.

After nearly a year in government, the Coalitionâ€™s record is disappointing.

Liberal Democrat voters (41%) are twice as likely as Conservative voters (20%) to say that the Coalitionâ€™s record is disappointing.

A Labour government under Ed Miliband would be better at protecting peopleâ€™s jobs.

The Liberal Democrats should pull out of the coalition if they donâ€™t get the changes they want to the NHS reorganisation.

I’ll update this when I’ve had the chance to look at the detailed data.