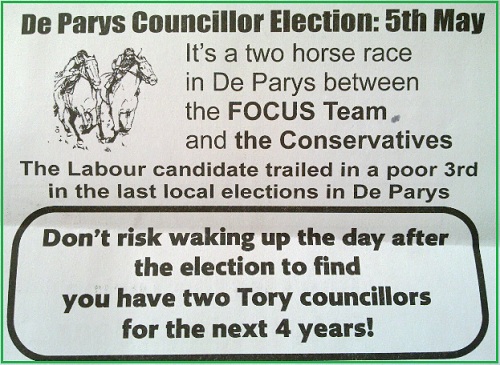 Or could it still have some of its potency?

The above, I’m sure, is typical of leaflets going out from the yellows to those identified as non-Tories in hundreds of CON-LD encounters throughout England. It’s worked in the past and has helped Clegg’s party build its local government base.

So how’s it going to resonate this time? Will the fact of the coalition mean that anti-Tory supporters will be much less likely to vote Lid Dem?

Notice the branding above – the term “Lib Dem” is not used and it’s about “The Focus Team”.

I don’t have an answer to my question. I find it hard to see LAB>LD tactical voting being on anything like the scale of recent years and this means that Labour voters will help the blues to pick up more seats.