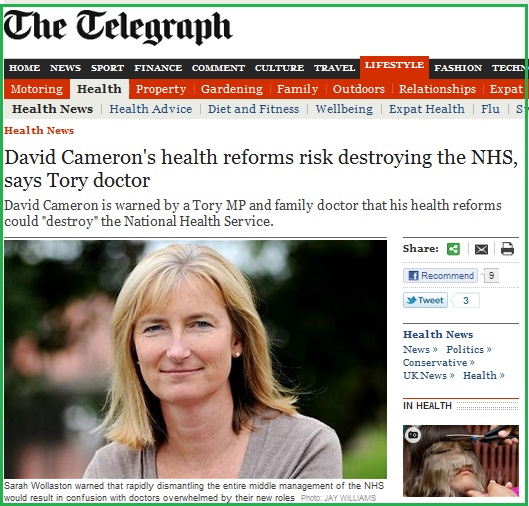 What can the whips do about the open primary winner?

Of all the 650 MPs who were elected last May Sarah Wollaston was almost unique. For she became Tory candidate following an open primary in July 2009 in which every elector in Totnes, irrespective of their party allegiance, was sent a postal ballot.

Other Conservative candidates were selected by so-called primaries but only in the Devon seat and in Gosport did the blues go to the expense of full postal elections.

The result is that the photogenic former GP has a very different relationship with her party machine than all but one other Tory MPs and that when she speaks out against official policy she is much less vulnerable to whip pressure.

Normally an MP writing about hostile articles such as Sarah’s in the Sunday Telegraph might expect the whips to “have a word” with their party chairman as the first step to bringing her into line. But Sarah owes her position much less to the machine and in view of all the hype when she was selected it’s hard to see how they could get rid of her.

Her comments like the following are going to be noted by Labour and picked up, surely, by Ed Miliband for PMQs:-

“.. if Monitor, the new economic regulator, is filled with competition economists with a zeal for imposing competition at every opportunity, then the NHS could be changed beyond recognition. It is no use “liberating” the NHS from top down political control only to shackle it to an unelected economic regulator. We have moved from a position of widespread support from patient groups and the professions for the health reforms to one of outright hostility.”

I’m not going to predict what’ll happen to the Health Bill but its hard to sure see the postal primaries on the 2009 Totnes and Gosport models being repeated.