Should the pollster look urgently at its newspaper weightings 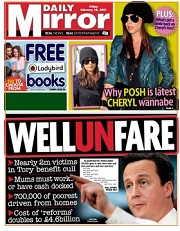 A couple of weeks ago the former head pollster at ICM, Nick Sparrow, highlighted in his monthly PB column the reliance that pollsters such as YouGov are placing on their newspaper weightings.

Of particular concern was the need to weight up in almost every poll the responses from Daily Mirror/Daily Record readers. At times this can mean an uplift of three-fold because the numbers responding invariably fail to meet the poll quota.

Having just looked at the January 2011 newspaper circulation figures I think there’s a reason why this is happening. The target weightings for Mirror/Record readers that YouGov in its daily poll and don’t seem to take into account the fact that the combined circulation of the two papers has declined much faster than other segments.

The result is that the views of readers of the Mirror and its Scottish sister, the Daily Record, appear to be given a value of 80+% more in YouGov polls than the latest circulation figures suggest – and what could that be doing to the findings?

Take one example from the table above – according to the latest circulation figures Mail+Express segment is selling an aggregate 2,776,443 copies a day yet YouGov gives its readers a lower weighting than the Mirror/Record which has a combined sale of 1,500,969.

And we see the same issue when comparing the Mirror/Record with all the other segments.

If a pollster is weighting by newspaper readership, and that of itself is controversial, then at least their numbers should be bang up to date.

Maybe this explains why they struggle so much with each survey to find Mirror/Record readers. Maybe it’s also a partial explanation of why YouGov can, at times, appear to be out of line with other pollsters.

I have alerted the firm’s deputy head of political polling, Anthony Wells, to my concerns and I have also contacted Angus Reid which also has newspaper weightings.