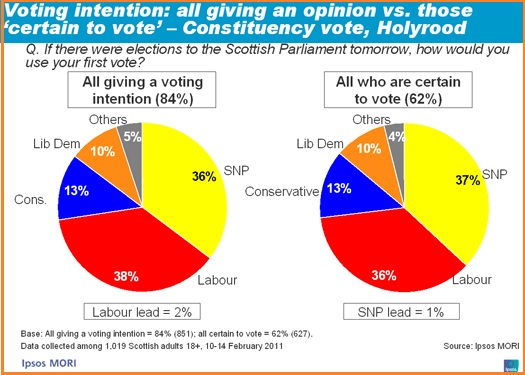 There’s a new poll from Ipsos-MORI on the May 5th Scottish parliament elections which has the SNP just ahead of Labour – the first time this has happened. Compared with the last survey from the pollster the SNP is up 6 while Labour is down five.

Until this point everything seemed to be pointing to Labour coming out on top even if they might be shortage of an overall majority.

The party that might be taking most comfort from the figures are the LDs. In 2007 they won 16 Holyrood seats – just four ahead of the projection.

Quite why Labour should have seen a fall-off in support since last November is hard to explain – giving their improving position across the UK.

The main conclusion is that these elections could be tighter than the pundits were predicting.