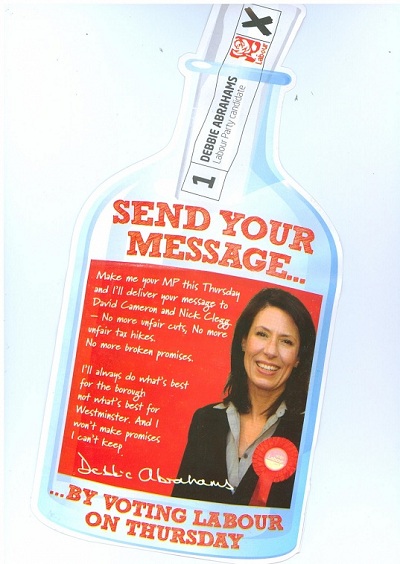 But hasn’t this taken the edge off their message?

The events that led up to this by-election have put a series of constraints on the red team which is certainly showing itself in the final couple of days.

For the one thing they’ve been unable to do is put out anything that could be portrayed as a smear against the LD’s Elwyn Watkins – the man who took the Woolas campaign to court leading to the ex-minister being disqualified.

The result, I think, is that their material has lacked bite. The “send a message” theme featured above is hardly a compelling closing proposition

This has been accentuated by the way the yellows have run their campaign. For as I suggested last week they have been able to make it about “Brand Watkins” rather than “Brand Lib Dem” with the candidate presented as the “No nonsense northerner” who “speaks his mind” and “does what’s right“.

In a by-election where the government of the country is not at stake the personalities and images of the contenders take on a new importance. It can become less about party and more about who is best able to “fight” for the area at Westminster.

Labour must have found it infuriating not to be able to take on Elwyn directly.

Will this matter tomorrow? My guess is that it will to some extent – for the purpose of the closing part of a campaign is less about making converts than getting your activists fired up and ensuring that supporters do actually turn up at the polling stations.

This is one of the reasons why I think the result will be closer than the ICM and Populus polls were suggesting.