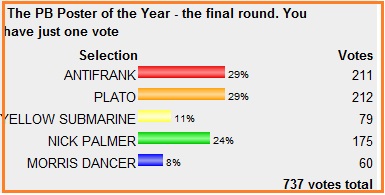 But would the outcome have been different with AV?

When voting in the PB Poster of the Year election closed at bang on 5am Plato had just one more vote than Antifrank and I declare her the winner. The final vote which enabled her to nose ahead was cast at 4.57am.

Well down to her and all the others who took part. Thanks also to those who voted.

Plato is our first female Poster of the Year and is one of a number of women who in the past couple of years have become regular contributors. It used to be the case that almost all those who posted comments were men.

This is the second year in succession that that election has gone down to just one vote. Twelve months ago Richard Nabavi just squeezed ahead of Yellow Submarine by a similar margin.

But would the election have been any different if it had been held under AV? Who knows – but without taking anything away from Plato I am supporting a move by Rod Crosby to run an experimental unofficial POTY election using the Alternative Vote system.

Check out the voting form here – it’s quite a good guide to the proposed new electoral system that will be voted upon in the UK referendum later in the year.

Whatever the outcome it will take nothing away from Plato’s achievement.