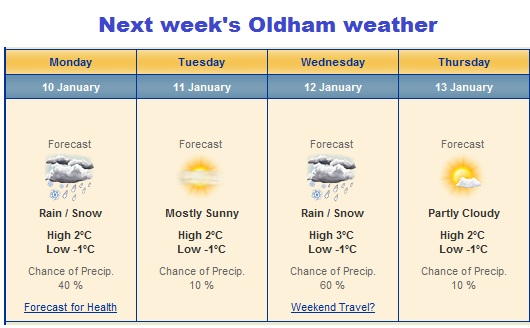 Which party is most affected by inclement conditions?

The traditional view has always been that the worse the weather conditions in the run-up and on polling day then the the party that is impeded most is Labour. In recent winter by-elections, however, Labour has done very well so I’m not sure about the old theory

So what are we to make of the ten-day weather forecast for Oldham, covering a week on Thursday, which shows that it’s going to be quite nice, if cold on by-election day.

The one factor that could make things harder for voters is the snow forecast for several preceding days. If that is still on the ground by the Thursday then it might act as a deterrent to people voting.

Whatever holding an election bang in the middle of winter is surely going to impact on turnout levels and the work done before Christmas on postal voting might prove to have been crucial.