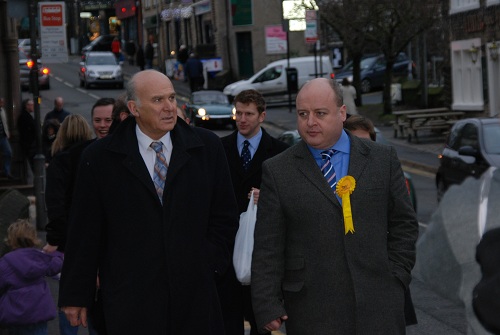 We’ve seen it time and time again – in fierce by-elections the character, personality and image of the main party candidates can become all important in whether they succeed or fail. These encounters move on from being battles between parties to who electors feel is the best individual most able to represent their area.

So it is that in Old & Sad the narrative from the yellows is all about the fight that their man, Elwyn Watkins, had to get it to this stage where the result of the general election was over-turned and the area’s former MP being banned from standing for public office for three ears.

The more that the legal case was pro-longed by Phil Woolas the more that Elwyn’s legal battle was big news in the locality and the greater his name recognition. Watkins is able to present himself as “a fighter” – a word that is used time and time again.

But you can’t ignore the national polling position of his party which is why I rate his chances at 40% to Labour’s 55%. In spite of the flurry of activity by the Tories they left their challenge far too late and I put them at 5%.

The one by-election poll that we know is due out included the main candidate names alongside their party affiliation. The main electoral impact of such surveys will be in establishing who is best to take on Labour.

A lot of activists from all colours have been out in the seat and their perceptions are what I believe are affecting the betting resulting in some movement against Labour on Betfair. On Thursday the odds were 0.18/1. Over the past twenty-four hours there have been trades at 0.35/1 and even longer. Currently you can get 0.27/1.