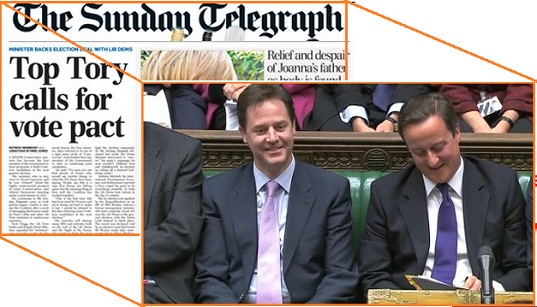 Would it be too much for both parties to swallow?

The main political story this Boxing Day morning is a report of comments by an unnamed Tory minister that the coalition could go into the next election with some form of electoral pact.

According to the report by Patrick Hennessy and Jonathan Wynne-Jones, “the minister, often seen as one of a tight inner-circle of “Cameroons”, went further than any member of the government yet has in endorsing joint candidates.”

Referring to the comments by Vince Cable the minister said: “I’m sure you can find plenty of Tories who would say similar things to what the Lib Dems have been saying. People say this is a sign that things are falling apart, but the amazing thing is how well the Coalition has worked together.

This is the first time this has been tried for 70 years and we’re doing out best to make it last. I would be relaxed to the idea of having some Coalition candidates at the next election.”

Clearly this will be like a red rag to a bull for large parts of both parties. For the inevitable consequence of such a deal would be a watering down of key policy positions that are dear to the hearts of both.

All the focus on the yellows, for instance, has over-shadowed somewhat the tensions amongst parts of the blue team over Ken Clarke’s penal policies and the government’s approach to Britain relationship with the EU.

In any case this is just too early. We’ve got the Old & Sad by election a fortnight on Thursday and the coming AV referendum – the outcomes of which could shape the way the next election is perceived. If in the former, against all the current odds, there’s a Lib Dem victory with the tactical support of blue switchers then a lot changes.

My guess is that the farthest this will go is an easing off of campaigning in some seats. But hard-right Tory or left-wing Lib Dem incumbents can’t expect this sort of arrangement to see them through.