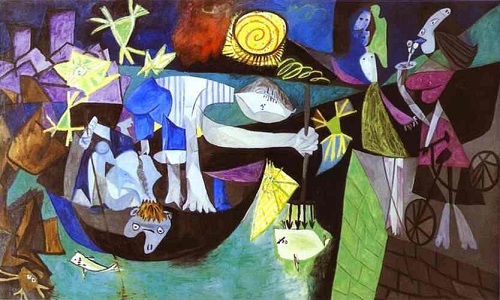 Was this the way of keeping the LDs distinctive?

With the continuing Lib Dem falling poll shares, the Vince Cable affair and the ongoing reverberations from the student fees decision there’ve been some fascinating posts on PB about what went wrong and the strategy the party might have followed.

One of the most insightful came overnight from long-standing poster, Yellow Submarine in which he looked to the art world for inspiration.

The 2010 result meant there is a big pot of blue paint and a much smaller pot of yellow paint. the coalition is a work of art and the Lib Dems have to decide how best to use there small pot of paint to put a LD mark of the finished work.

The Clegg strategy was always â€œTurquioseâ€. mix the paints entirely, effect the whole paint albeit by not very much. a single visual fusion. Undeniable influence but only if you are the sort of person that notices the difference between blue and turquiose. Iâ€™d argue most voters donâ€™t, wonâ€™t and never will.

The alternative is the Picasso strategy and keep the little pot of yellow paint separate and sacred and chuck the thing over the blue cnavas or a single yellow streak. Lots of pure blue, very little actual yellow but by god youâ€™ll notice the yellow and its not watered down.

This is the antithesis of Cleggs stategy. Iâ€™d argue that it all goes down to (a) Cleggâ€™s dutch understanding of coalitions and liberalism (b) the implict strategy re AV.

I think that there’s a lot in that. The Lib Dems need to be able to point to real specifics to demonstrate their mark on the coalition government.