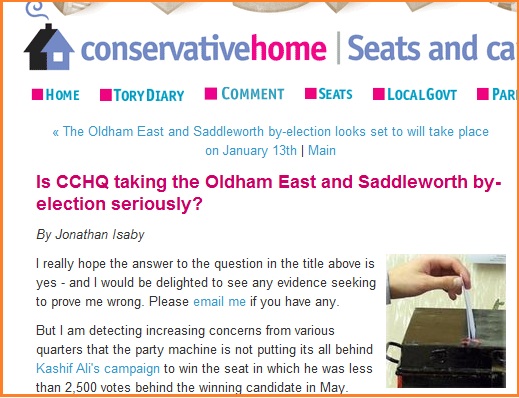 If so – should you be doing the same?

According to Jonathan Isaby in ConservativeHome there are signs that the Tories are not really trying to win the Old & Sad by-election.

He writes: ..I am detecting increasing concerns from various quarters that the party machine is not putting its all behind Kashif Ali’s campaign to win the seat in which he was less than 2,500 votes behind the winning candidate in May.

Many of those I have spoken to fear that CCHQ has decided not to fight Oldham East and Saddleworth seriously in order to maximise the chances of the (second-placed) Lib Dems gaining the seat from Labour..”

As evidence he notes that at previous by-elections MPs were instructed to make a certain number of trips which has not happened and that those who“were on the pre-election Candidates List have not heard a peep from CCHQ”.

He goes on: “I would have suggested that CCHQ has consciously not told the Candidates List about the contest as some kind of elaborate initiative test, but for the fact that in recent days I have spoken to several ex-candidates who have tried to offer their campaigning services and not yet been taken up on their offers.”

All this is certainly matched by reports from on the ground. The blue campaign has been very hard to discern and from David Cameron’s perspective it all makes a lot of sense. A yellow victory with some tacit blue support would bind the Lib Dems even more into the partnership and also send signals out for the next general election.

As many have observed the fact of the coalition means that Cameron’s been able to marginalise his right wing – a situation that’s probably seems preferable to having a small majority when this faction could exert enormous influence.

This is, of course, a big gamble for Cameron and his relations with his party. No doubt it will be officially denied.

One consequence of the Isaby article is that it will get picked up by the Lib Dems in the constituency and will be used to encourage Tory voters to vote tactically.

Given what’s happening the 7/1 from William Hill against a yellow victory is even more value for money.