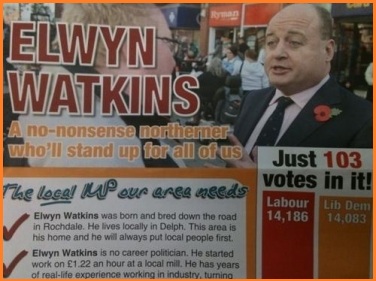 What will the holiday season do to the campaign?

The Oldham East and Saddleworth by-election was touched on during PMQs and this has sparked off a lot of speculation on the timing.

Some reports suggest that the writ will be moved by the Lib Dems tomorrow which would make Thursday January 13th the big day.

This is not an issue over which the speaker has control. If the writ is moved it has to be dealt with in the house straight away and the decision sets off a time table.

Normally it’s the party that held the seat at the general election that moves the writ – but in this case the result was voided by the courts.

The big question is whether the Lib Dems – who were just 103 votes short on May 6th are wise going for an early poll – or would it be better waiting until some of the dust has settled from last weeks university fees vote?

That’s hard to say – but their candidate has been in place for months and has become quite well-known in the area. The Tories are sticking with the Asian barrister who represented them last time while Labour only made its choice last weekend.

My guess is that the Lib Dems think that they’ll do better going early leaving Labour with much less time to build up their choice. A key matter is that the yellows want to make this as much as possible about what Phil Woolas did and the longer they wait the less potent that issue will be.

Who knows whether that’s right? Whatever it’s going to make the formal campaign very tricky for all parties particuarly if the wintry conditions continue.

Labour have a good record with by-election defences when they’ve put back the date as far as possible. Crewe and Nantwich, and Glasgow E Â in 2008 and Norwich North in 2009 were held quickly and the red team lost all three seats. Glenrothes and Glasgow NE were delayed by quite come time and they held on comfortably.