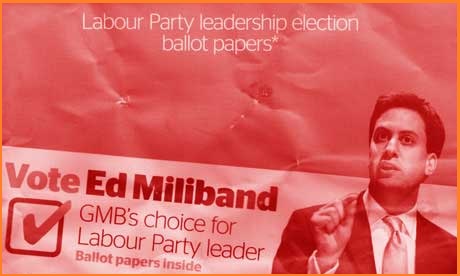 Can his new PR team turn the media narrative around?

The mail-pack featured above, from the GMB union to those of its members entitled to vote in Labour’s leadership election, played a pivotal role three months ago in winning the prize for the younger Miliband brother.

It was developed for the GMB, UNISON and UNITE unions as part of a plan to get round a Labour party ban on candidates’ promotional materials being included in the voting packs for September’s election. Instead the ballot papers were nested in separate envelope inside the packs above which were then mailed out to those qualified to vote.

Is it the feeling, I wonder, that somehow EdM’s victory was not legitimate one of the reasons why the media narrative has not been supportive and why he’s struggling in the leadership approval ratings?

True the voting intention polls all now show Labour in the lead but polling history suggests that when leader approval ratings are out of alignment with voting intention numbers then it is the former that are a better guide to electoral outcomes.

A challenge, of course, for opposition leaders is that it can be so hard getting media attention. They can only say things – governments can actually do and that, inevitably, is where the news interest lies.

So the two key newspaper figures who have been recruited to EdM’s team have a big job on their hands. How can they get their man coverage when all the attention is elsewhere.