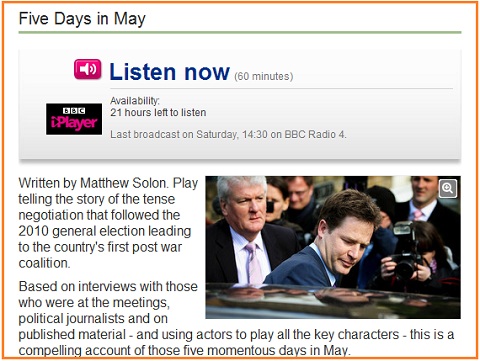 Does this add to our understanding of today?

I’ve just finished listening to Matthew Solon’s radio play which seeks to tell the story of the five days after the general election which led to the formation of the coalition.

It’s based on interviews with those who were directly involved and on published material with actors playing the key characters. I think it works brilliantly and what we hear is a compelling account of what went on.

It certainly added to my understanding and why things are viewed as they are. The play’s portrayal of how the Labour team approached the negotiations is a good backcloth to the current political scene. To my mind the one who screwed the red team’s bid was Ed Balls.

It’s due to “run-out” on BBC IPlayer tomorrow afternoon. If you’ve got the time then it’s well worth it.