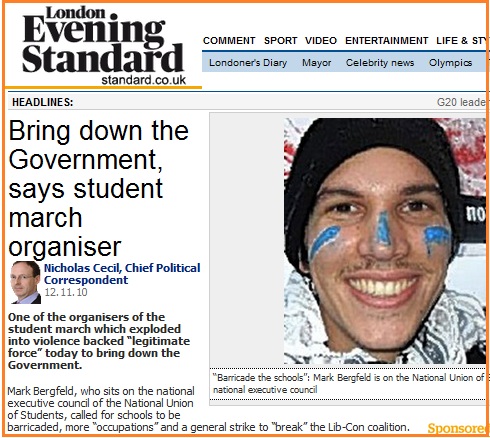 How serious should his bravado be taken?

London’s Evening Standard is running a story tonight quoting one of Wednesday’s march organisers and a member of the National Executive of the NUS which could be seen as almost amounting to a call to revolution.

He’s called for schools to be barricaded, more â€œoccupationsâ€ and a general strike to â€œbreakâ€ the Lib-Con coalition

Bergfield is quoted as saying: “He said: â€œThe ConDems are the real vandals so force is legitimate to bring them down…â€‰we want to see a system which is beyond cuts, job losses, redundancies, beyond people being thrown out of their houses.

â€œWhat we want to see in this country is workers and students taking mass action. We want a general strike in this country. We want barricaded schools. We want to give people the confidence to fight back against the cuts.â€

According to the report Bergfield is of German citizenship who now lives in East London. It won’t be long before he’s described as a “foreign agitator”.

For Nick Clegg, who’s had a bit of a tough week, this could not have come at a better time. To be faced with peaceful protests against the student fees decision is one thing – a call to bring down the government is another.

It’s no wonder that NUS president Aaron Porter was keen to stress that Bergfield’s views don’t represent those of the union. Methinks that Mr. Porter has got to go a bit further than that.