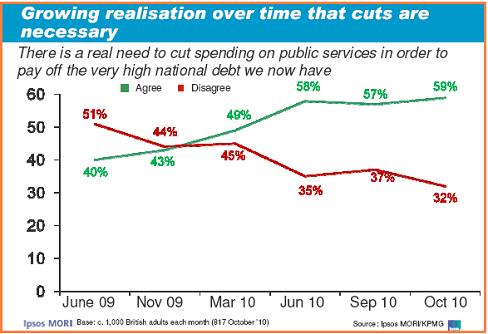 But voters split over whether the plans are right

Ipsos-MORI has got the first post-CSR poll out and finds both good and bad news for the coalition.

While overall there is acceptance that cuts are needed the public is evenly split on whether the government has made the right decisions.

A total of 41% think it has made the right decisions and 38% the wrong decisions.

There’s also a worry on timing. Two-thirds of the public would prefer that spending is cut more slowly to reduce the impact on public services (68%) than think it is important to cut spending quickly (27%).